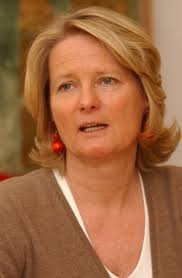 Doraja Eberle (born August 2, 1954 in Salzburg) is a former Austrian politician of the ÖVP and founder of the humanitarian aid organization "Farmers help farmers". From 2004 to 2010 she was a member of the Salzburg state government. Doraja Eberle is a daughter of the former Salzburg Provincial Council Friedrich Mayr-Melnhof. She attended the Social Academy in Vienna. After the state election in Salzburg in 2004, she was a former municipal representative of Gröding Provincial Councilor in the state government of Gabi Burgstaller. Her areas of responsibility were: family, childcare, youth, adult education, popular culture, music, cultural heritage preservation, community development, national park. In 2007, she initiated the creation of a "Liesl Geisler Prize of Humanity" by the Province of Salzburg. The price should be named after Liesl Geisler. Liesl Geisler was the landlady of the Krimmler Tauernhaus and in the post-war period helped more than 5,000 Eastern European Jews escape to Palestine via Italy. Eberle continues to work with her husband for "farmers help farmers". She has since received many honors, including the "Central European Award of the IDM - Institute for the Danube Region and Central Europe" and the Decoration of Honor of the State of Salzburg. It was only in July 2018 that Doraja Eberle received the "Humanum fundatio" award for her relief organization's commitment in Bosnia.