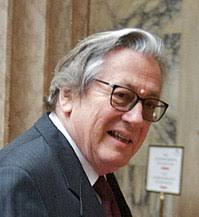 Ferdinand Lacina (born December 31, 1942 in Vienna) is an Austrian politician of the SPÖ. Lacina was Minister of Finance for approximately nine years (from 1986 to 1995), making him one of the politicians with the longest service in Austria. The descendant of Viennese Czechs studied at the University of World Trade, the predecessor of WU Wien. Little is known that Lacina's lecture notes, which recorded the anti-Semitic gaffe of Professor Taras Borodajkewycz, played a major role in the political affair and demonstration involved. Lacina worked for the Vienna Chamber of Labor before working for the government under Bruno Kreisky in 1980. First, he was Chief of the Cabinet, then State Secretary in the Federal Chancellery. From 1984 to 1986 Lacina was Minister of Transport and then Minister of Finance until 1995. Ferdinand Lacina has received numerous awards, including the Grand Golden Medal for Services to the Republic of Austria and later for services to the State of Vienna.