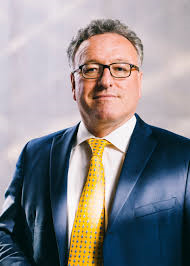 Heinrich Schellhorn (born April 29, 1961 in the Tyrolean Zillertal) is an Austrian politician of the Greens. He is the successor of Astrid Rössler as Deputy Governor of the Province of Salzburg. Schellhorn grew up on a mountain farm in the Zillertal, studied law in Innsbruck, which he completed with a doctorate and moved only because of the judicial year to Salzburg. From 1992 he worked in a law firm as a lawyer. Schellhorn was community representative and finally city council for the group "Lebenswertes Hallein" from 1992 onwards before he joint the Salzburg Greens in 2005, first as a financial officer and board member, after the state elections 2013 onwards as a provincial council with the agendas social, care, culture, popular culture and museums. After the state election in 2018 he was elected Deputy Governor.