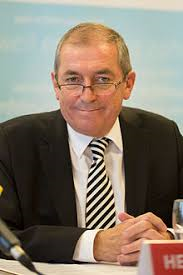 Heinz Schaden (born April 29, 1954 in Graz) is a former Austrian politician of the SPÖ. From 1999 to 2017 he was mayor of the city of Salzburg. Schaden obtained his doctorate at the 1981 Doctor of Philosophy in Salzburg. He then studied in Vienna until 1985. Also at the Diplomatic Academy Vienna. As early as 1992, Schaden was deputy mayor of the city of Salzburg, before he became the first directly elected mayor of Salzburg on April 30, 1999. In addition to his duties as mayor, he was also chairman of the SPÖ in the city of Salzburg and a member of the Bundesparteivorstand. On 18 October 2013, he resigned from all party offices. Within the SPÖ Schaden is considered as stubborn. Schaden resigned as mayor in September 2017. His successor as mayor is the former vice-mayor Harald Preuner (ÖVP). Noteworthy: Heinz Schaden was close to two spectacular, potentially lethal incidents, but he always got away unharmed. He was passenger on board of the Costa Concordia when it crashed in front of the island of Giglio on January 13, 2012. He was near the bomb attack in Istanbul on 19 March 2016.