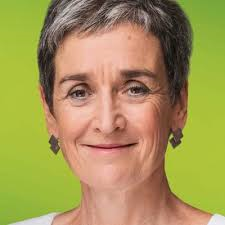 Ulrike Lunacek (born May 26, 1957 in Krems, Lower Austria) is a former Austrian politician of the Greens. The trained interpreter (for English and Spanish) became known as one of the Vice-Presidents of the European Parliament. She was elected to this position on July 1, 2014. In July 2009, Lunacek moved to the European Parliament as head of delegation of the Austrian Greens. She sat in numerous committees. She was also known for her years of work at the head of the Austrian Greens. In the Austrian National Council elections 2017, she was the leading candidate of the Green Party. After the Greens failed to make it into the National Council, Ulrike Lunacek resigned from all political posts. That's the preliminary result. Lunacek received the Great Golden Medal for services to the Republic of Austria. among other things. That was in 2009.