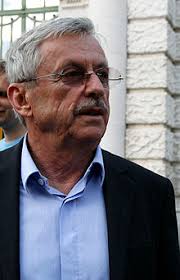 Austrian journalist with a PhD. in history, born in 1941 in Linz. From 1969 to 2002, he was a member of the Austrian Broadcasting Corporation and director of the television program Club 2 as well as a radio broadcast on Ö1). In 2002 he held the position as “Theodor Herzl Lecturer in Poetics of Journalism” at the University of Vienna. Huemer conducted a monthly series of talks at the Stadttheater Walfischgasse from 2011 to 2015. During the season 2013/2014 he was engaged at the Vienna Burgtheater as a presenter of the project “The Last Witnesses” by Doron Rabinovici and Matthias Hartmann.