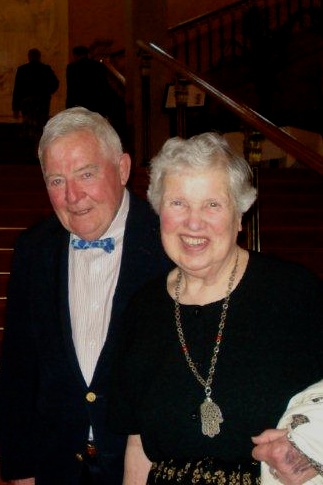 Prof. Wickham Skinner died on Jan 28, 2019, just weeks before his 95th birthday. Hailed as “educator, strategist, leader, and philanthropist“, many obituaries were published. As he was one the most outstanding teachers in the history of the Harvard Business School, I chose excerpts from the one which was published by HBS, presumably authored by Prof. Bob Hayes, one of his brilliant former students. Hugh Blackmer, the younger brother of Alice Skinner, PhD, sent me several obituaries of his sister. Drawing on these texts and on the basis of my own recollection of a 50 year fríendship with the Skinners, I compiled the biography of Alice Skinner. C. Wickham Skinner, Harvard Business School’s James E. Robison Professor of Business Administration, Emeritus and an eminent international authority on production and operations management who is widely regarded as “the father of manufacturing strategy,” died on Monday, January 28 at his home in Saint George, ME. Throughout his long and illustrious career, Professor Skinner (Wick) influenced generations of students, scholars, and practitioners with his superb teaching skills and corpus of groundbreaking and often contrarian books and articles focusing on the revitalization of U.S. manufacturing. Skinner joined the Harvard Business School (HBS) faculty in 1960 and was named to the Robison professorship in 1974. He retired from the active faculty in 1986. His research, published in three books, ten case books, and numerous articles in Harvard Business Review (HBR) and elsewhere, examined the problems and opportunities of U.S. manufacturing companies, particularly the relationship between production operations and total corporate results. In his seminal 1969 HBR article, “Manufacturing – the Missing Link in Corporate Strategy,” Skinner argued that top management could turn production into a competitive weapon. Skinner developed his notion of an operations strategy further in his acclaimed sequel, “The Focused Factory,” published in HBR in 1974, which urged manufacturers to focus each of their factories on a limited, manageable set of products and markets that could lower costs, especially over-head, and make each of the factories a competitive weapon. The concept was adopted by many companies, and became a regular topic in business schools around the world. “This notion, with its emphasis on simplicity, clarity, and low over-head, foreshadowed the more modern concept of LEAN manufacturing,” wrote Hayes, in a tribute to Skinner in the Spring 2002 issue of the Production and Operations Management journal. In 1978, Skinner authored Manufacturing in the Corporate Strategy, which summarized much of his work during the previous decade. A revised version of this landmark book, Manufacturing: the Formidable Competitive Weapon, was published in 1985. Skinner expanded his call for fundamental changes in “manufacturing structure and technology” in his influential HBR article “The Productivity Paradox” (1986). Upon retiring from Harvard Busines School at the age of 60, he and his late wife Alice moved into the house they had built in Tenants Harbor, Maine, where they had spent summers for many years. Retirement was anything but quiet for manufacturing strategy “guru.” “The world is too full of interesting and important problems to allow much sitting back,” he said in a 2013 interview. He continued to write, advise CEOs, and remain active on a number of corporate boards. He spent ten years as a trustee of the University of Maine System, a network of public universities in the state. While keeping one foot in academia, he also directed more energy to some of the causes he felt important – education, arts and the environment – holding leadership roles in non-profit institutions focusing on these areas, including the renowned Farnsworth Museum in Rockland, Maine, and the Natural Resources Council of Maine. During retirement, Skinner learned to fly his own plane. An avid sailor, he also spent more time plying the waters in one of his many boats, including his flagship 40-foot sailing cruiser Calliope, named after one of the nine Muses in Greek mythology. He played tennis three times a week and, as an amateur artist, enjoyed applying paint to canvas. -------------------------------------------------------------------------------------------------------------- PS: In 2016 Wickham Skinner´s autobiography “Making Things Better” was published by Yellow House Publishing, Rockport, Me. In this 400+ pages book he provides insights and lessons of experience as “institution builder”. Making things better was his “lifetime focus” and “his tools were simple, human and limited: Be cheerful, helpful and kind”.