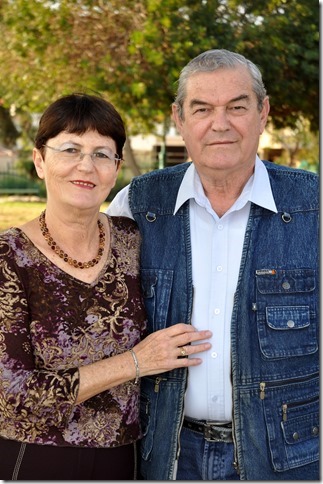 "Our parents Shoshana (Rajzla Brondwajn) and Menachem-Mendel Schwartz, originally from Zamość and Komarów in Eastern Poland, fled their homes eastwards in September 1939, shortly before the beginning of the Nazi occupation. Detained by the Soviet authorities, they were sent to labor camps in Siberia, where they spent most of the Second World War and where Yaakov, their first son, was born in 1941. After the war ended, the family lived for a while in Bukhara, Uzbekistan. They later moved to Lodge, Poland, where our mother, who was a certified teacher, taught Jewish orphans who survived the Holocaust. They then returned to their hometowns in Poland, only to find out that almost their entire families were murdered by the Nazis. Determined to reach the land of Israel, they traveled to Austria via Czechoslovakia. They spent several months in Salzburg and Saalfelden, where our mother continued her work with Jewish orphans who had survived the Holocaust. They were smuggled over the Alps and across the border on the Krimml Tauern Pass into Italy, which hosted numerous Jewish refugee camps. Little Yaakov, almost six years old now, was carried on our father's shoulders all along the hard journey. Ahuva was born in Milan in 1947, and named after her two late grandmothers, whom she never met. In 1948 the whole family immigrated to the newly-founded State of Israel. At the beginning life in Israel was not easy, but it was the first time that we lived in a place we could call "home". In Israel, our mother continued her work as a teacher, teaching Hebrew to generations of elementary school students, many of them new immigrants. Our father, who was a tailor in his profession, found work as a construction worker. Yaakov later on married Ora, with whom he raised three children. Today he is the grandfather of six and great-grandfather of two. Ahuva married Uri, with whom she also raised three children. Today she is the grandmother of 11 grandchildren.